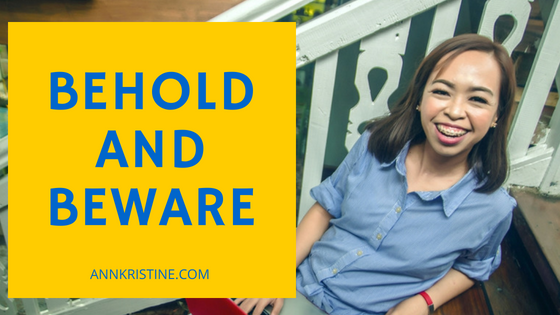 Trick or treats, Halloween parties, television shows featuring the unexplained and the unknown. Except for the first two, scary stories had been the usual happening this time around.

This is the time of the year when we scare ourselves. Children, as cute as they are, dress themselves into monsters, ghouls, or fairies and superheroes. More than a decade ago, I walked to a mall with kids doing trick or treat, while there I was, at junior college, grumpy because I bought new things that my group needed to redo a project. I wanted to shout to those children, “You’re going to have nightmares tonight!”

Adults do likewise. This is the time to walk like a zombie, like what they see on The Walking Dead or the recent Asian hit, “Train to Busan”. A few months back, I chanced upon a flash storage of The Walking Dead. To kill my curiosity, I watched the first season. I never allowed myself to engage with the rest of the show, to the dismay of few friends. When I asked why, I told them that it has the same concept with Lost: to survive, you need to outwit, outplay and outlast the people around you one day at a time.

Since I do not like to scare myself, and my choices are limited during this time, I decided to watch documentaries. I hit play on a National Geographic 9-11 documentary on a Saturday afternoon, while I sat myself on my father’s rocking chair for the documentary, “The Rape of Europa”.

I went further into history for the film, “Rape of Europa,” as this happened during the Second World War. The documentary explained how former dictator Adolf Hitler wanted to seize all of Europe’s artworks and place them into his German hometown, making it bigger and better and more beautiful than Paris. Humanity’s patriots and art heroes took all effort to safe keep works of art. Eventually, a group called Monuments Men were assigned to ensure that all stolen artworks will be returned to its rightful countries and owners. (A movie was based on this heroic acts.)

You may tell me that what I watched weren’t as scary as ghosts and ghouls. To tell you the truth, they are.

Adolf Hitler’s unprecedented art stealing, aside from trying to annihilate a race, is scary.

Terrorists putting down buildings and killing thousands of people, is scary.

They were not works of fiction. They happened right before our eyes.

Ask your grandparents about “Peace Time” and they will give you tons of stories.

I saw the Twin Towers fall one after the other after being hit on television more than a decade ago, wondering if what I was seeing was really true.

What is scarier: a wandering soul or what a person can become in pursuit of his life’s journey?

I heard the late Jim Rohn in my iPod recently again (sheesh, he died in 2009 yet he still manages to teach me). He said that with observation and experiences, anyone can be successful. But as you make your way to success, behold and beware, he said.

Behold of the experiences, people, and lessons that you will have in pursuit of your goals. Because all of them would help you and make you tell yourself, “Wow, it really is possible!”

On the other hand, beware of what you can become in pursuit of what you want. Would you hold grudge to people who did not make the way easy for you? Would you give up in just one try to tell everyone that it’s not worth it? Would you be a grateful person or a grumpy person?

In my choice to avoid horror stories, I unconsciously dealt with the scariest thing: what I could become as I continue my journey. But this is a scary story that won’t give me sleepless nights.

It’s the scary story that can be a wonderful dream, as long as I remember to behold and beware.