a Market Like Marvel: Marketing Strategies and Tactics That You Could Do for Your Business - Ann Kristine

Market Like Marvel: Marketing Strategies and Tactics That You Could Do for Your Business

After raking $1.5 billion worldwide for Avengers: Infinity War, it is always easy to say that Marvel has a big marketing machine. They got a big purse and a lot of snipers just in case somebody from the camp spoils anything.

But as I have observed during the months, weeks and days leading to the release of Marvel Cinematic Universe’s (MCU) much-awaited movie, I realized two things:

Let’s just say that I am an MCU fan and a Facebook Marketing Strategist rolled into one. You may say that this is a geek’s work, yet I consider this a lesson for me to know how I am able to determine a business’ marketing goals, strategies and tactics. I believe that if an entrepreneur or expert is clear about these three things, it is sure to achieve success.

Yes, Marvel is a big film studio. But it doesn’t mean that entrepreneurs and experts couldn’t learn a thing or two about how Marvel does their marketing.

There’s no need for a superhero suit. Here’s the breakdown of how Marvel did their marketing for ‘Avengers: Infinity War’.

Marvel’s GOAL: Make ‘Avengers: Infinity War’ the a must-watch movie in all MCU and rake in at least $1 billion worldwide.

Several actors appeared on D23 (Disney 23) and SDCC (San Diego Comic Con) in July 2017, the best places to be to promote the movie. They showed the official trailer to the audience of each event. Marvel won’t release the first official trailer until end November 2017.

Press conferences around the world took place in April 2018. Casts were sent to different countries such as Brazil, Mexico, Great Britain, South Korea, Singapore, and China to meet the press and hold a 20-minute movie premieres.

Where in the world were the Avengers?

Good Morning America, a show on ABC (ABC is a parent company of Disney), had a segment called “Avengers Around the World”. The show segment features the press activities or live interviews of Infinity War casts.

James Corden released a skit on his show, Late Night with James Corden, featuring several of the cast.

The Tonight Show with Jimmy Fallon released “The Marvel Bunch”, their spin of the Brady Bunch hit show anthem.

Empire also released their 7 Marvel-themed covers (with Thanos as the 7th cover, alone) in March 2018.

Each of the actors in the movie got their own Facebook Page, Instagram and  Twitter. But with Marvel’s high level of secrecy, they were only allowed to publish images of their press tour and premiere interviews.

Most noted was Mark Ruffalo, who announced that he will be on hiatus for the mean time. He’s known to spoil some movie parts along with Tom Holland.

Robert Downey Jr. used Instagram to cover the press conferences he attended to in Asia.

Some of the casts got cover stories on different magazines worldwide.

Some of its stars took the opportunity to invite fans to donate to their chosen charity for a chance to win Infinity War premiere tickets.

Robert Downey Jr. had his Donate $10 to his foundation, Random Act Funding.  On the other hand, Marvel also had their Marvel Studios Ultimate Fan sweepstakes.

In Jimmy Kimmel Live!, host Jimmy Kimmel asked the cast to draw their characters. The drawings were up for an auction, where proceeds go to a kids’ charity as well.

Some of the drawings from the cast.

Aside from the 30-second spots on television and online, Marvel released a new trailer in time for Super Bowl.

You may have also noticed Marvel’s cartoon characters popping on your Facebook newsfeed as Sponsored Posts.

Marvel released limited edition shirts and other merchandise through its 10th Anniversary MORE THAN A FAN in Amazon and ShopDisney.

Fandango allows buying movies in advance, so Marvel to this platform as well.  Fandango, which is another marketing story for another day, declared that it generated more than 36% of the $39 million domestic box office for preview showings.

All activities were covered by Marvel’s own social media arsenal: Facebook, Twitter, YouTube, Instagram, Pinterest, and Snapchat. Their social media carried all the buzz for the movie, and it’s not impossible. Social media is free to use, and so Marvel maximised it to their advantage.

Some of the social media tactics generated were:

YouTube: all the official trailers and TV spots are on their channel, as well as their behind-the-scenes and 1-minute documentaries on the MCU journey. One of the most popular was the release of the Marvel Cinematic Universe Class Photo, another top secret activity they did.

Twitter: Marvel released 22 Infinity War emojis in time for Super Bowl. Why? Because Americans use Twitter more often than Facebook, and they use the said platform while watching the sports event. 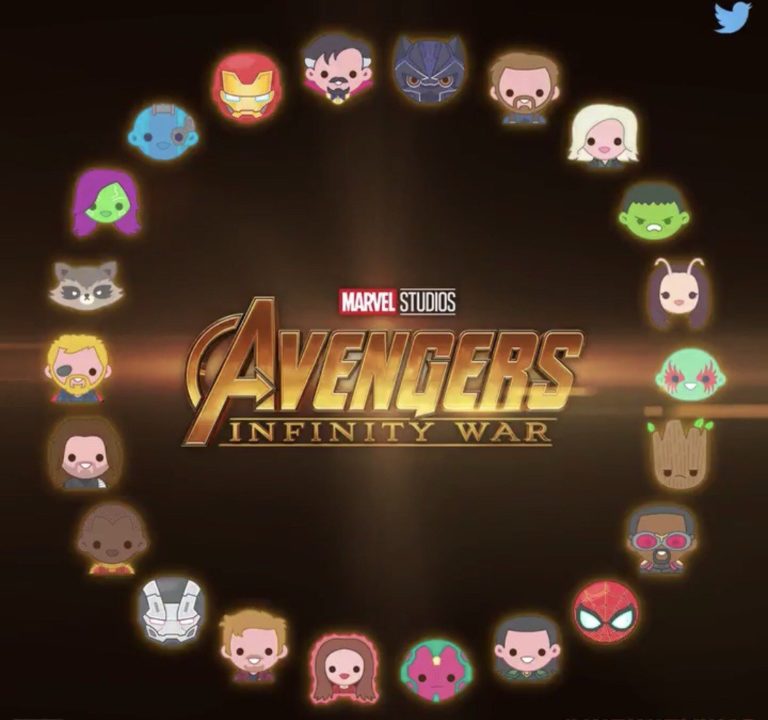 The “This Changes Everything” series was a collection of MCU characters’ individual montage from their respective movies. In their caption, it has the tagline, “It’s all been leading to this.” Check this example of Black Widow video from Instagram.

The hashtag, #HeroActs, generated buzz when Marvel announced that it would donate $100,000 to a kids’ charity if social media followers will Like or Re-tweet specific posts of the cast with Infinity War merchandise. The same merchandise will be given to the kids’ charity. 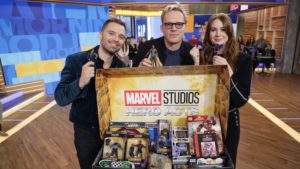 I want these, too. Credit: https://nerdist.com/avengers-infinity-war-cast-charity-hasbro-funko-amazon/

And the best of all (which led me to observing Marvel’s marketing), is the #ThanosDemandsYourSilence campaign. You certainly don’t want any spoilers on the much-awaited movie of MCU. So Marvel released this campaign weeks by the first week of April 2018. Infinity War directors The Russo Brothers started the campaign with a letter with the hashtag. 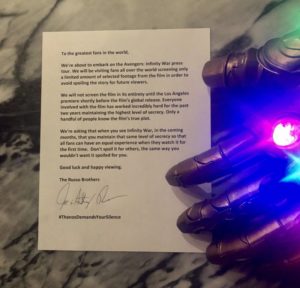 We’ve all been warned. Credit: https://marvelstudiosnews.com/2018/04/03/russo-brothers-thanos-demand-silence-regarding-avengers-infinity-war-spoilers/

To wrap up my Marvel marketing observation, here are my three takeaways:

Do this change everything for marketing? Not really. It’s just that Marvel knows how to do it, marvellousy.

What lessons from Marvel marketing have you learned or observed? Be a superhero to others by sharing it in the comments.