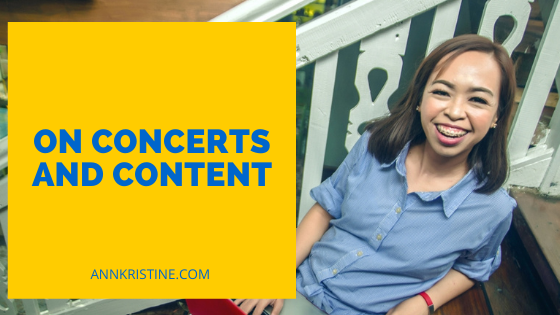 Last February 13, 2018, I attended Dionne Warwick’s concert. My mother is a fan (as to me with Backstreet Boys).

What was I doing in a Dionne Warwick concert?

Well, I am not a fan. I have been hearing Dionne Warwick on the radio (when I was still listening to FM radio, that is). You may have listened to some of her songs: I Say A Little Prayer For You, A House Is Not A Home, Anyone Who Have The Heart, I’ll Never Love This Way Again, and the eternal That’s What Friends Are For. (Wow, that’s a playlist.)

I thought I was able to exhaust all marketing lessons after I watched a Backstreet Boys concert in 2015. Until I sat down in a concert in which I think I was the youngest (average age is 40).

I thought I was just accompanying my mom to Dionne Warwick’s concert. It turned out I was also to learn – and learned I did about CONTENT. With a bit singing of course.

Here’s the idea that I want to share to you: Content can be re-purposed. I have see it time and time again in concerts.

As she introduced one of her signature songs, Warwick said, “I re-arranged this song to adapt to the times. Same song, same message.”

When Lady Warwick adjusted the songs based on the “times”, she meant:

But to a fan (which is my mom in this case), these things did not matter. When I heard her say to one of the songs, “Oh God. I was at first year high school when that song played”, I knew I hit the right chords.

Pandemic Puzzle: My Series of Images on SlideShare