The truth about my Virtual Professional journey and the World Cup

Happy to have witnessed an awesome sporting event at the comforts of my home!

Four years ago, I was in an 8-5 job. I just finished my VA assignment and looking for a VA gig. At the same time, the World Cup is everywhere on the Internet and the news.

Four years later, I’m happy to be in a different state: I’m now a full-time VA, catching up with my Online Marketing Club and VA 101 assignments (I’m trying!).

This time, the World Cup in on – and I have totally fallen in love with soccer.

Many people do not like the sport because it takes a while (90 minutes – and added extra times in case no goal was done) to make a score. Others say they are already asleep once a player scores a goal. But for millions of fans across the globe, soccer is in their blood. Indeed, the game takes patience, hard work, skills, and a lot of dedication.

My intention was to just watch the opening ceremony. I ended up updating myself on the World Cup games.

You need patience – lots of it – before you see a goal. 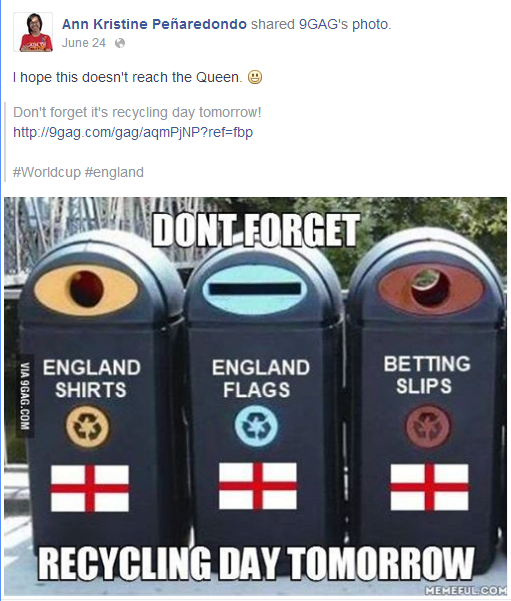 The World Cup memes – just like this one – were just hilarious!

As it was my first time to get to know the game, I relied on history as to who is the best team to cheer for: Brazil. Unfortunately, they missed to win their important games. It took me half a day to sink in Brazil’s 7-1 loss to Germany. Oh well, like what they say in Filipino, “bilog ang bola” (the ball is always round).

I am glad I kept myself updated in the matches, the players (eherm, ok I’m admitting here that Julio Cesar of Brazil is my #mancrushWorldCup), the fans (they are simply creative and passionate), and the game through the official site of FIFA, Facebook, Mashable, Twitter, and Google’s Doodles.

So heartbreaking. The Germany-Brazil game took a while to sink in.

Four years ago, I was just trying to find my way to become a VA.

Four years later, I am now a full-time VA.

Hhmm, I wonder where will I be in four years’ time.

Chief Marketing Officer of the next best thing that ever happened in the universe?

Wow, I’m excited for the next four years.

I’m excited to the next four-year journey of World Cup – and myself!