What #AlDub is teaching us about Marketing 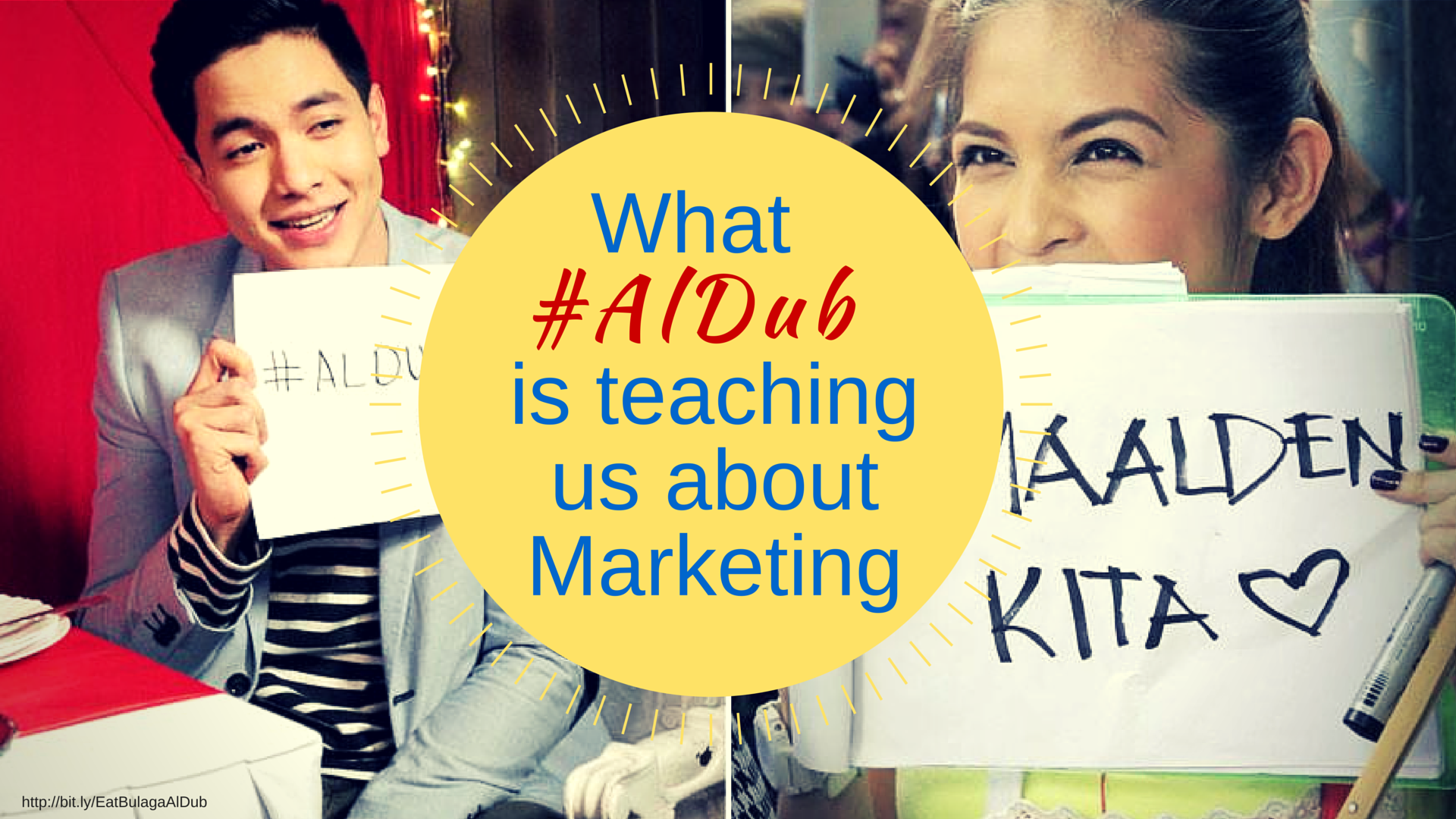 Okay, okay. I am going to confess: I have watched TV in the afternoons these past weeks.

My usual routine in the afternoon is going straight to the home office after a short nap. This time around, I am switching the television on to watch Eat Bulaga, a long-time variety show in the Philippines. If you were one of the attendees of the Date with Freedom: 2015 Virtual Careers Summit and Seminar, you may remember that I even suggested to study marketing instead of watch television. What happened to me?

I would wanted to confess my guilt of watching television to a priest. However, it seems I am not alone. Last Saturday, more than 20 million people were watching the same show to witness the wedding episode of the AlDub fever [Update: Wednesday’s episode was reported to achieve the highest rating, the story of AlDub’s near meeting.]

I am sure that you now know by now what AlDub means. Just in case you don’t (what planet are you from?), AlDub is a ship of actor Alden Richards and Philippines’ Dubsmash Queen Maine “Yaya Dub” Mendoza tandem. They exchange sweet conversations by lip-syncing their lines, much to the dismay of the antagonists yet delivers delight to audiences. Read more about their story here.

I chatted with my co-virtual professional friend Joy Bautista Collado on Facebook about the AlDub fever. We were able to list down the marketing lessons that we have learned from AlDub – while we are waiting for the “tamang panahon” (right time) for the two actors to meet. 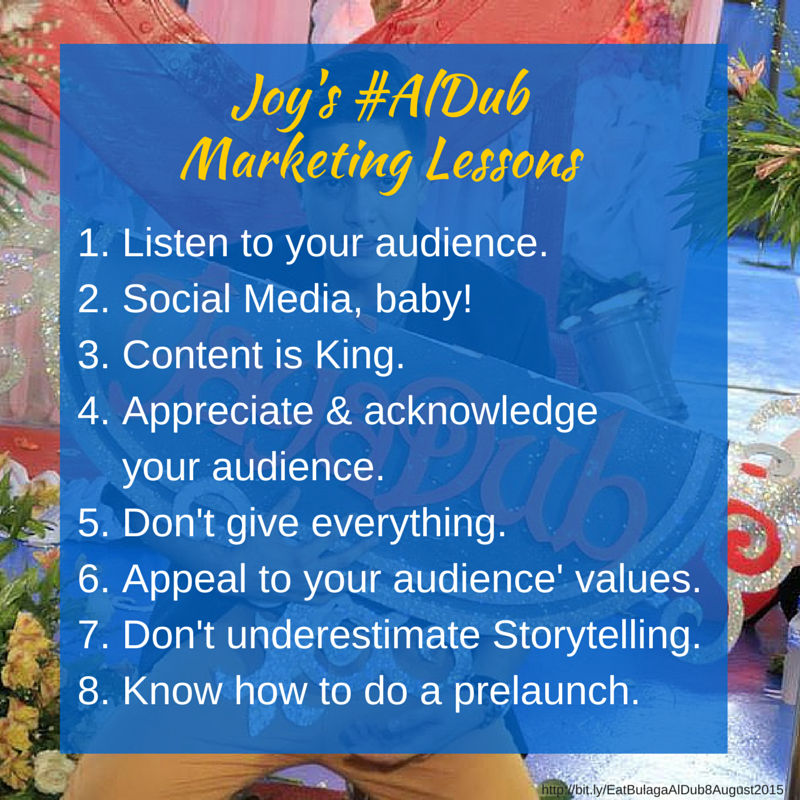 Listen to your audience.
When Eat Bulaga saw the big response of the fans to the AlDub experiment, they went with the flow.

Social Media, baby!
Do not underestimate the power of social media. Be active in social platforms that the audience is using. And lead the way to the hashtags!

Content is King.
The funny antics of comedians Jose Manalo, Wally Bayola and Paolo Ballesteros plus the charm of Alden and Maine. Those are the two best ingredients of making people stop what they do every afternoon (and asking the boss to extend the lunch break, students to drop their review notes and even skip classes. Irrational but it is happening!).

Appreciate and acknowledge your audience.
The actors acknowledge the fans. In all Alden’s media interviews, he never ceases to thank the fans (In the latest episode, a pair of dolls were featured on the show. Reports say it came from fans.). On the other hand, Maine takes on Twitter to send gratitude.

Don’t give everything
Maine only has two media interviews so far (she was featured in a news magazine show and she was interviewed a week after the story started). If you were not aware of these interviews, you do not really have any idea how Maine’s voice sound. I think that is a strategy to keep the mystery going.

Appeal to your audience’s values.
Thumbs up on Lola Nidora’s “sermon” (message) on the perfect time for everything. 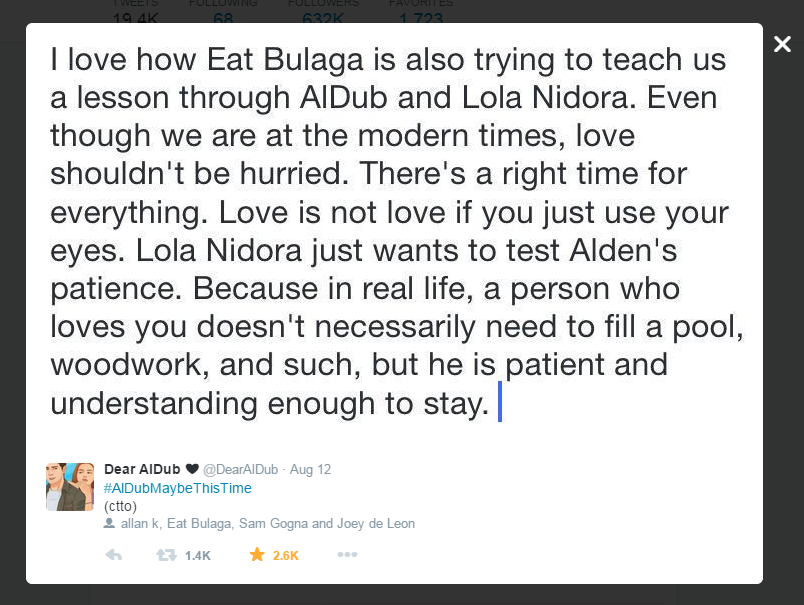 Screengrab of one of the tweets on the #AlDub segment of Eat Bulaga.

Do not underestimate Storytelling.

Know how to do a prelaunch.
Product Launch Formula creator Jeff Walker calls it “the shot across the bow”. It is like a warning shot, telling your audience that something is coming. Giving clues to what will happen next is an example. 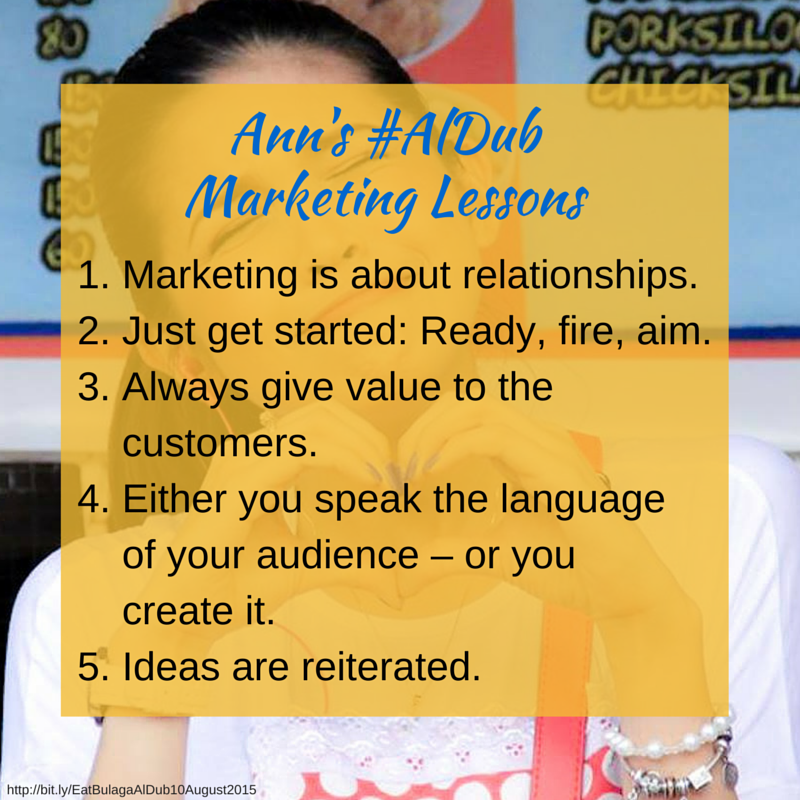 Marketing is about relationships.
Marketers can also learn from Lola Nidora character’s “sermon” on waiting for the right time. A marketer needs to build a good relationship with potential clients. As a man cannot ask marriage to a woman on their first date, a marketer cannot force clients to buy products or use services immediately. Cultivate relationships by listening to potential clients through engaging in conversation and providing beneficial information.

Eat Bulaga knew the power of listening to its audience. Even before the AlDub fever, they have conceptualized games and segments that made people laugh or win prizes. The show built a long-lasting relationship with the audience because they listen.

Just get started: Ready, fire, aim.
I learned from author Brendon Burchard and Product Launch Formula creator Jeff Walker that in the experts industry, you need to start even if you start small. Go with the “ready, aim, fire” method instead. If you want things to go perfectly well before you start marketing a product or a service, the perfect time will not come. Instead, “ready, fire, aim” should be done.

The AlDub craze started when the staff found out that Maine has a crush on Alden. The show’s director thought of letting Alden appear on the other side of the split screen to see how Maine would react. As Maine got conscious, the tactic aimed and went straight to everyone’s hearts.

Always give value to the customers.
This is the same insight as Joy’s lesson number six. Eat Bulaga knows that a segment of its audience is youth, so they provided valuable lessons to them by:

As a marketer, ask yourself – how will the business (whether service or product) give value to the customers?

Either you speak the language of your audience – or you create it.
Do you know of people who celebrate their relationship milestones every week and every month? AlDub also had weeksaries and a monthsary even if they have not met.

One of the show’s host created the term “Kalyeserye”, which means a drama series that takes place on the streets.

I learned a lesson on speaking the language of the audience when I decided to become part of the conversation. I posted a tweet on Thursday, 16 August, about the AlDub episode on that day. I included the hashtag of the day, too. 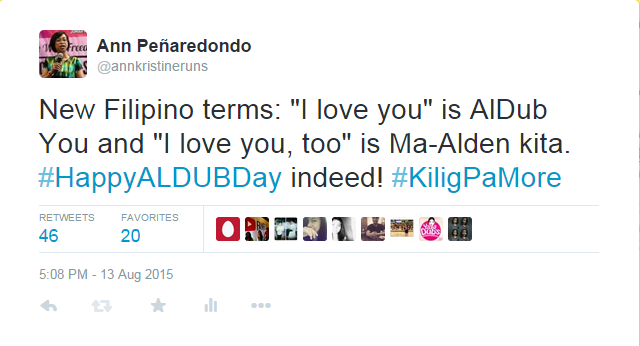 This is the first time this happened on my tweet.

I was surprised: my Twitter Notifications did not stop. I had to log out of my Twitter because the notifications kept on coming. When I opened my Twitter the next day, my tweet was re-tweeted forty times and tagged as favorite twenty times. I think I also got a handful of followers.

Ideas are reiterated.
In Jeff Walker’s video blog on innovation versus marketing suicide, he mentioned that it is better to look at something that was already successful, check the marketing, and then add special something to it. Cases in point were Steve Jobs and Henry Ford. Jobs did not invent the mp3 player; he improved it. Ford, however, did not create the car. During his time, he made a car that was economical.

We are familiar with the Romeo and Juliet story idea: boy meets girl, wants to pursue a deeper relationship but people around them are against them. We are also in favor of the underdogs – we believe that with patience and persistence, an underdog can emerge as a winner. There is nothing new with Romeo, Juliet, and the underdogs.

Yet the AlDub story was a hit due to these special somethings:

As of this writing, Joy and I and the millions of #AlDubNation are still waiting for the time when the two will finally meet. The right time, or “tamang panahon”, may be sooner or later, but I am happy because I was able to find marketing lessons on a guilty pleasure.

But this means I still need to confess this to a priest, right?