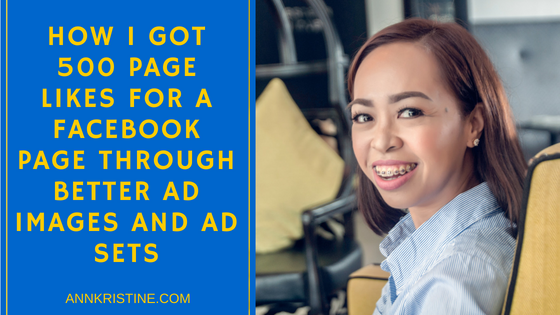 Here is the story of my adventure of how I got 500 Page Likes for a Facebook Page.

A few months ago, one of my friends asked for my help on Facebook Ads.

Get this: since my Facebook campaign a year ago (as you may have seen on the previous posts), I have not been inside Power Editor. However, without battling an eyelash, I said “Yes”. This happened before I created a new Facebook campaign for myself. (Check out Part 1 and Part 2.)

Her objective for the page was Page Likes – the client wants to have an additional 500 Likes on the Facebook Page with a budget of P1,000.00 (approximately US$22.00). I studied the company and consulted a Facebook Ads Expert friend after that. Then, off I went inside Power Editor. 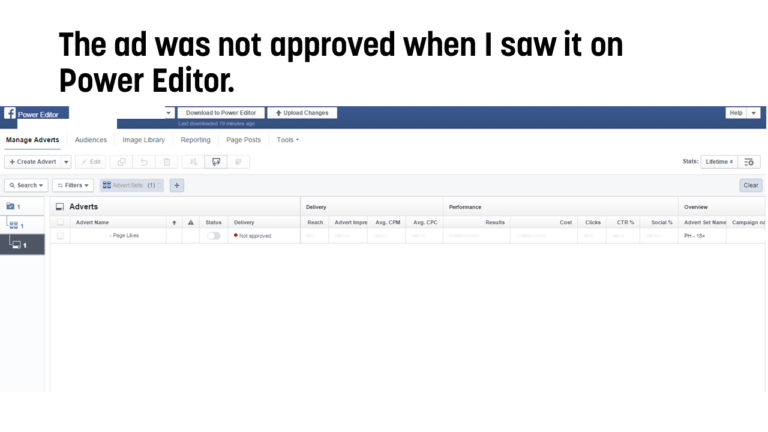 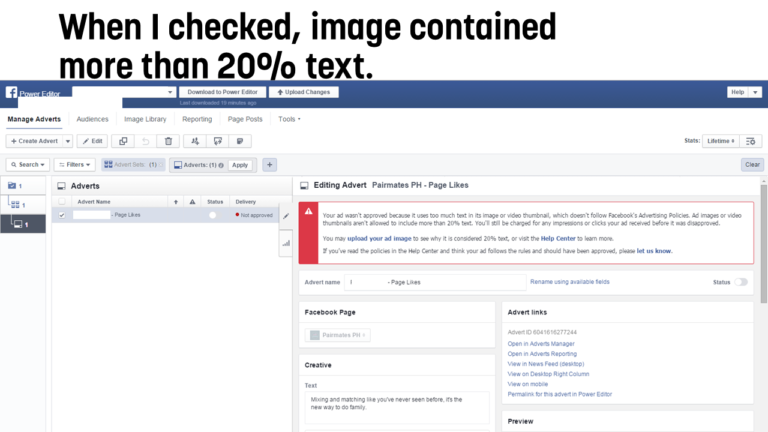 So the next thing I did was to look for an image from the Facebook Page so I can use it for the Facebook Ad image. I went to Canva to do the image work. 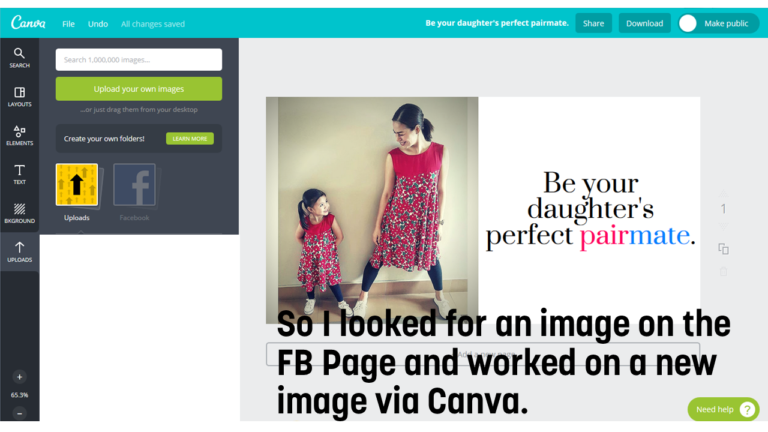 Then, using the Grid Tool, I checked if the ad image would pass the allowed 20% text. 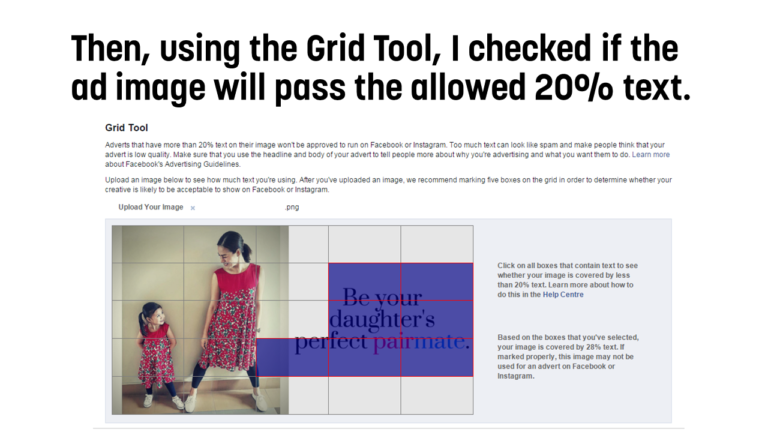 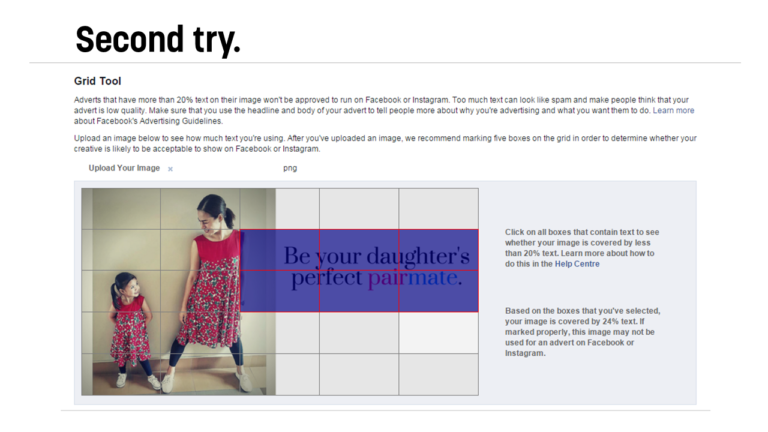 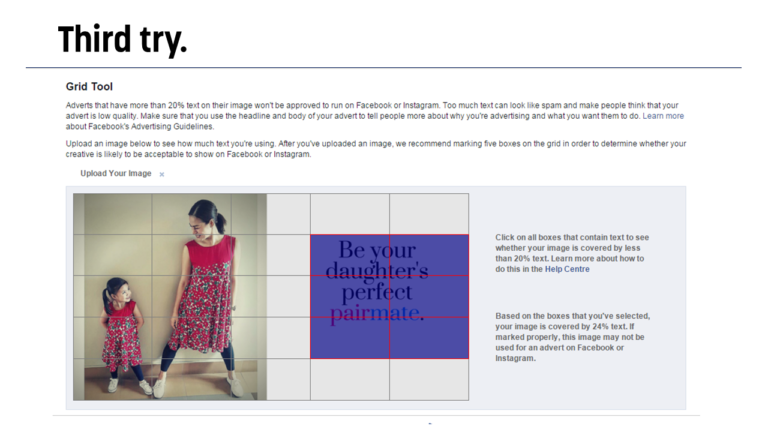 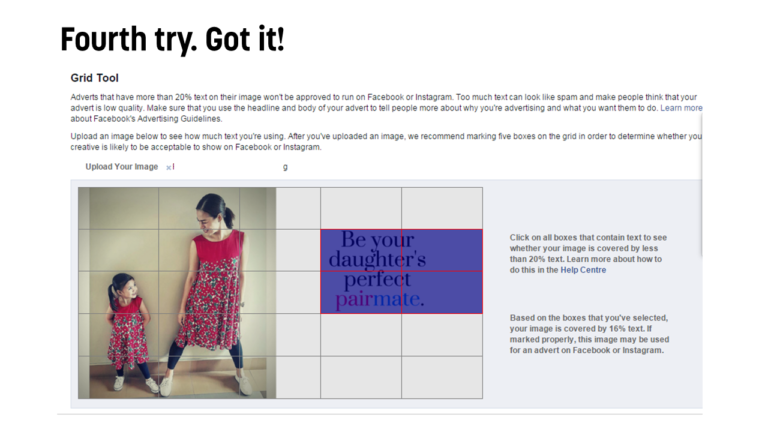 Recent reports say that Facebook is already changing the 20% text rule. I liked how Jon Loomer explained the hype. Read his article here.

I did the rest of the Facebook Ad images in Canva for the other ad sets. 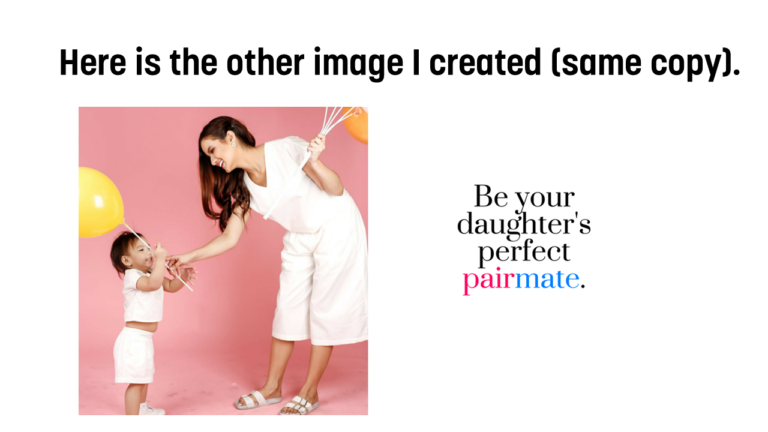 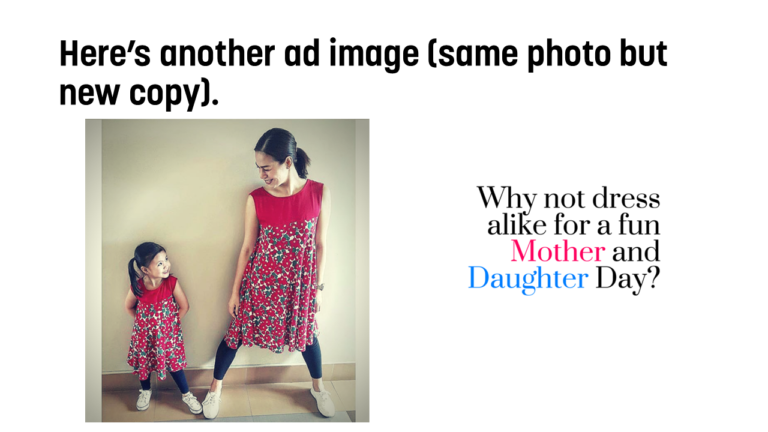 SECOND, I CHANGED THE AD SETS.

Before I handled the Page Likes Facebook campaign, there was no detailed targeting and the potential audience is over 13 million. That is quite a lot. In these situations, I always remember Seth Godin’s remark, “Everyone is not your customer.”

With the given ad sets that my Facebook Ads Expert friend suggested, I did the following: 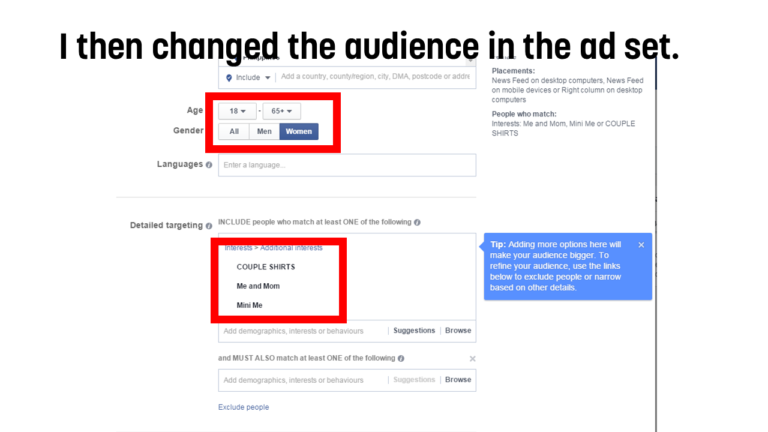 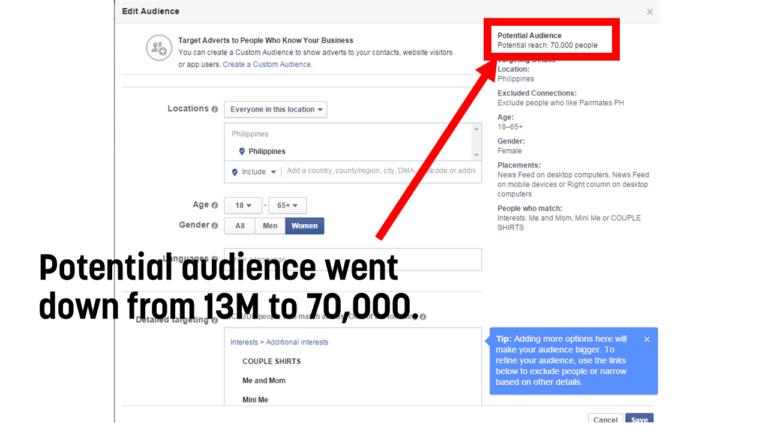 After those changes, potential audience went down from 13 million to 70,000. Now that’s more like it!

After setting the budget and other important things like ad placement and optimization and pricing, the campaign was ready. 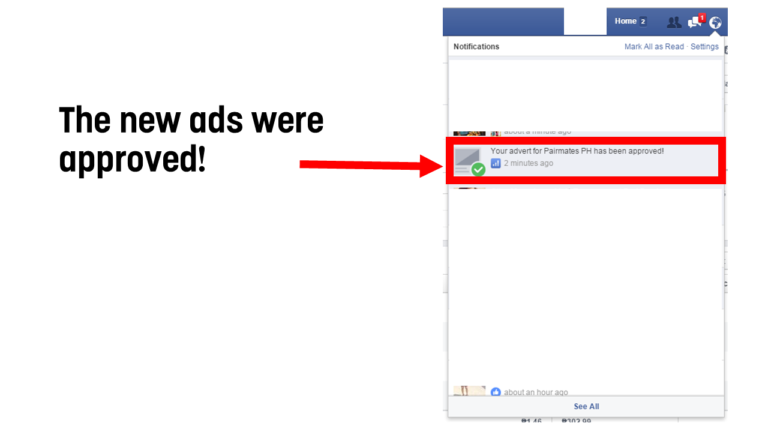 Here are the results of the campaign per day. 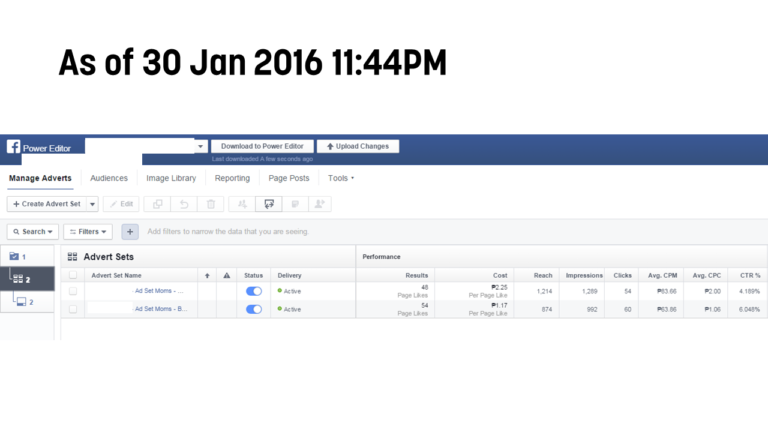 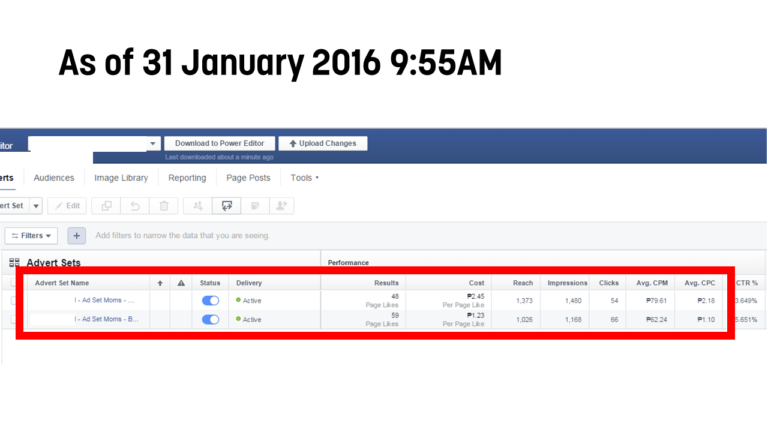 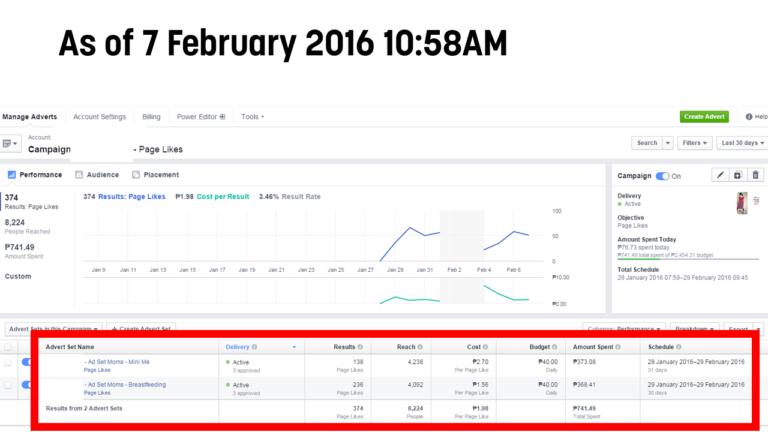 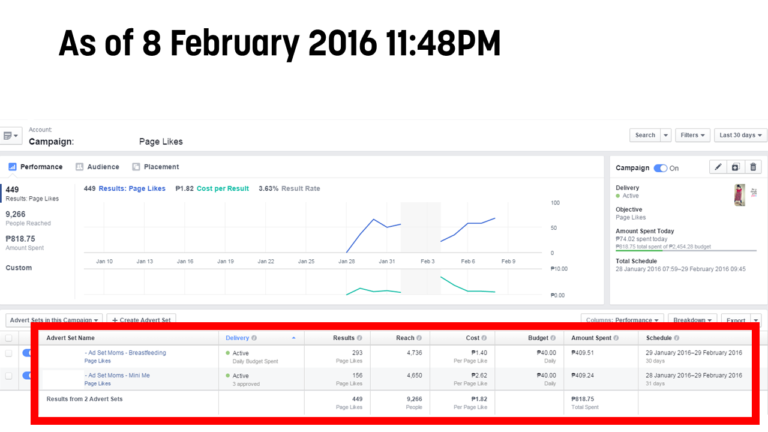 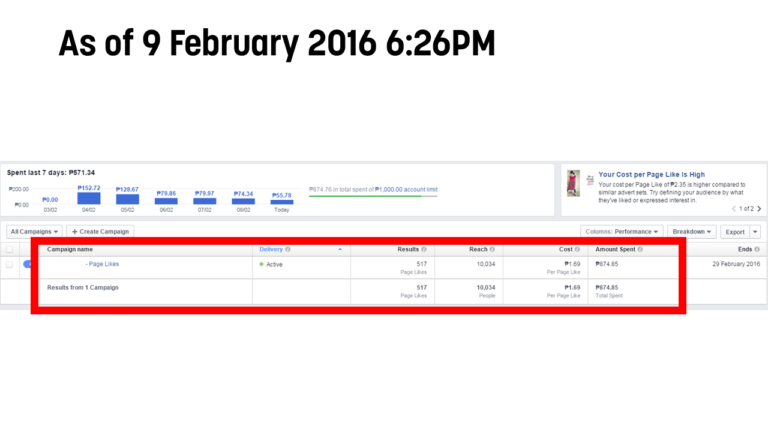 Was I able to reach 500 Likes for the Facebook Page? You bet I did! In fact, the Facebook campaign got more than the expected target Page Likes! 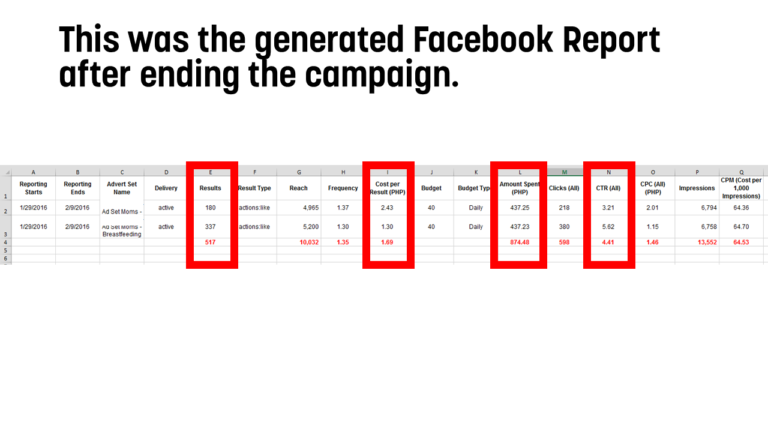 For someone who has not been inside Power Editor for close to a year, this was an achievement. That meant I still got the moves!