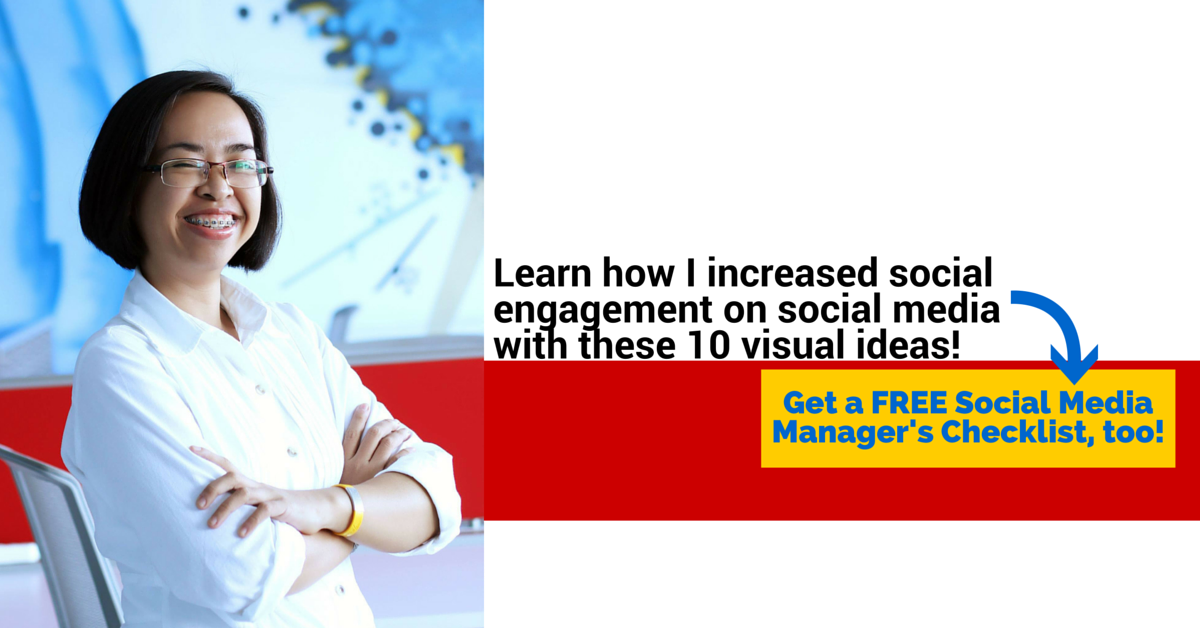 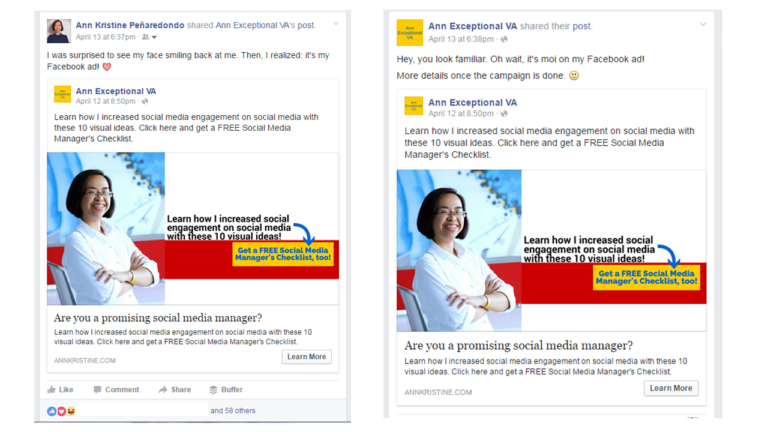 Honestly, no, I was not that surprised. Why? Because I really ran a Facebook campaign for one of my blog posts.

Here’s the story of how I saw my own Facebook ad.

In one of my mastermind sessions with my Facebook Ad Expert friend early this year, (what I meant of early was January 15, 2016 – yes, 15 days to 2016 and we are already wrecking our brains out), she mentioned about me running a Facebook Ad campaign about myself.

It was incredulous, really. Why would I do that? Why would somebody do that?

My friend made me realize this: if I create a Facebook ad campaign of myself, I would be able to show potential clients three things:

Two, I could show my skills in social media marketing.

Three, I could show my skills in content marketing.

The idea made me excited. But I was still wondering how I could do it. 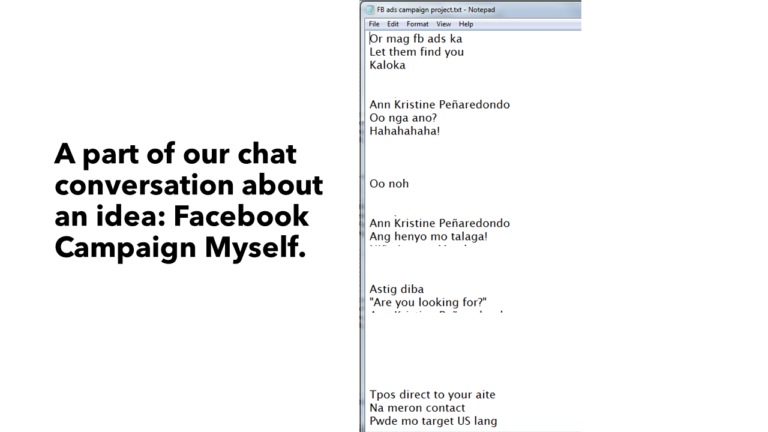 A screenshot of our chat conversation.

While thinking of how to execute it, I prepared this website by publishing more blog posts (I hope they are of help to you!), creating a lead magnet, and placing an optin. 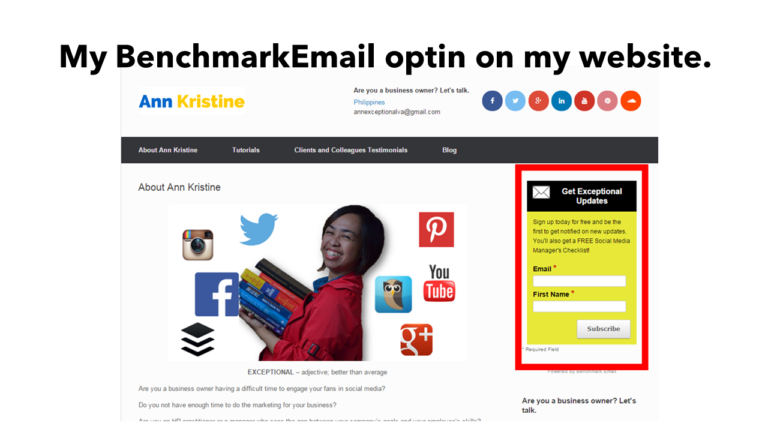 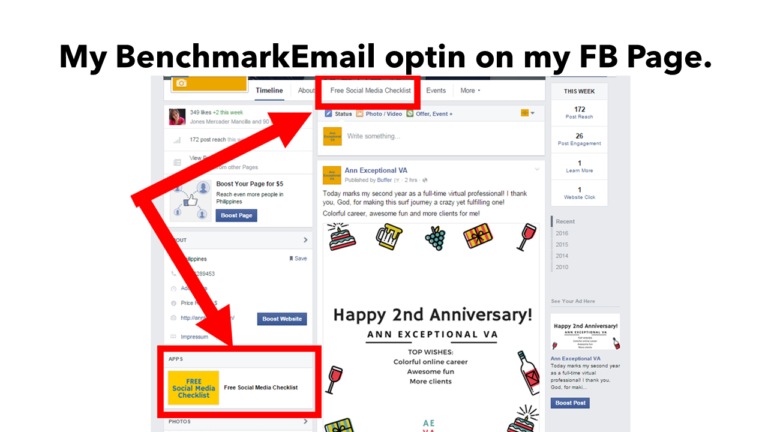 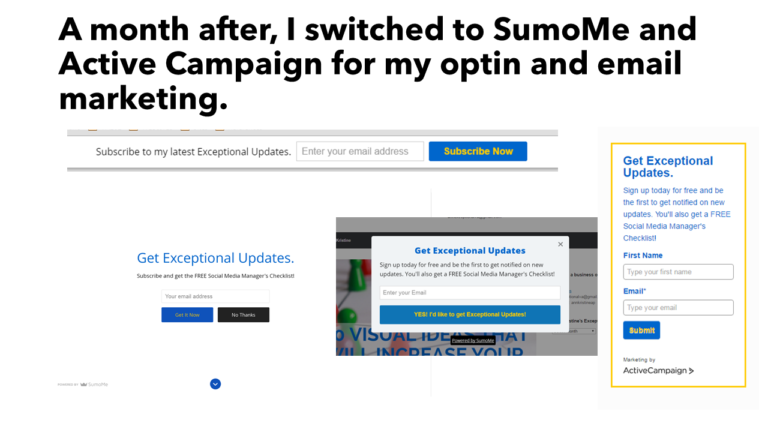 Almost three months passed, and the Facebook Campaign Myself idea was still on the clouds. I again saw myself in another mastermind session with my friend. We ended our session with these action plans:

One, I will create a content based on a social media skill.

Two, I will run Facebook ad campaigns to 1) test my lead magnet and 2) let potential clients see me (and then eventually contact me to hire me).

ONE, I CREATED A CONTENT BASED ON A SOCIAL MEDIA SKILL.

I re-purposed a webinar presentation and made it ready for the blog post. I also dug on Canva for some visuals as proof of previous work that I did.

The result was this blog.

With that connection, I would be able to test my lead magnet to check if people would get it. Thus, my Facebook Campaign Myself – Campaign 1 is lead magnet. I created two ad sets for freelancing groups and my website audience plus Facebook Page Likes.

And so I created my Facebook ad campaigns with the goal of website conversions at US$2.00 a day budget. 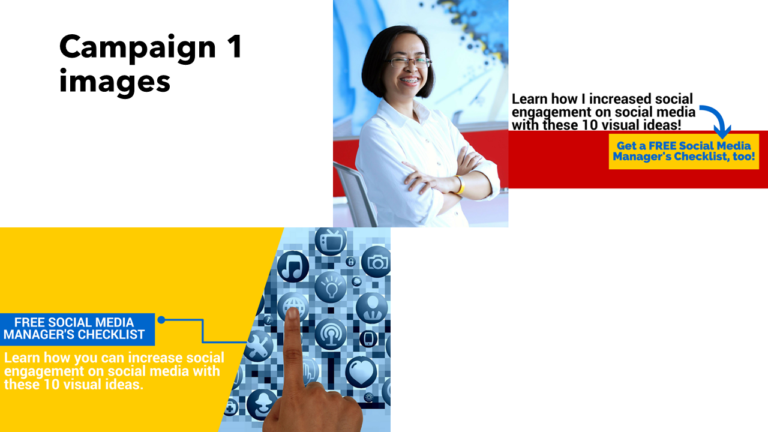 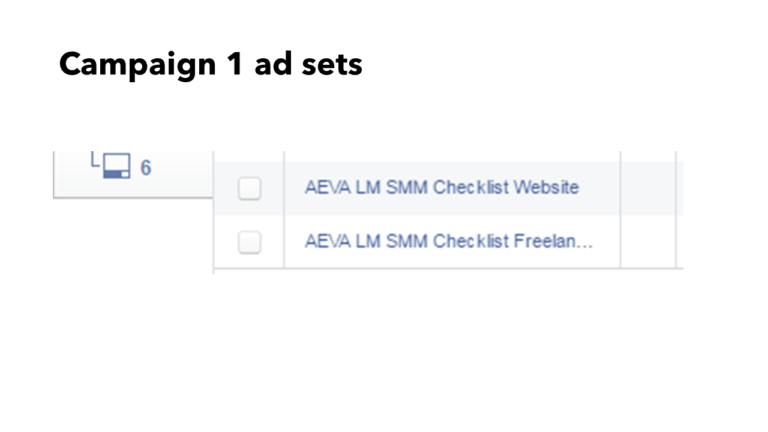 Now, remember the idea during our first mastermind session this year? I told myself that I would like to hit two birds with one stone. So the Facebook Campaign Myself – Campaign 2 was set for potential clients. I created two ad sets for Los Angeles, California and Australia. 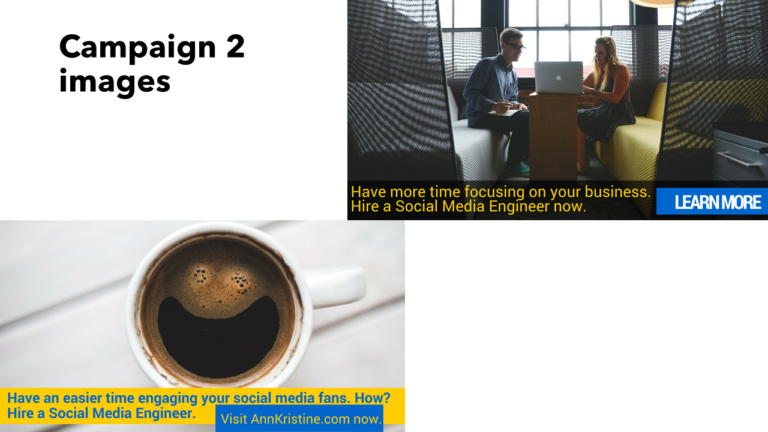 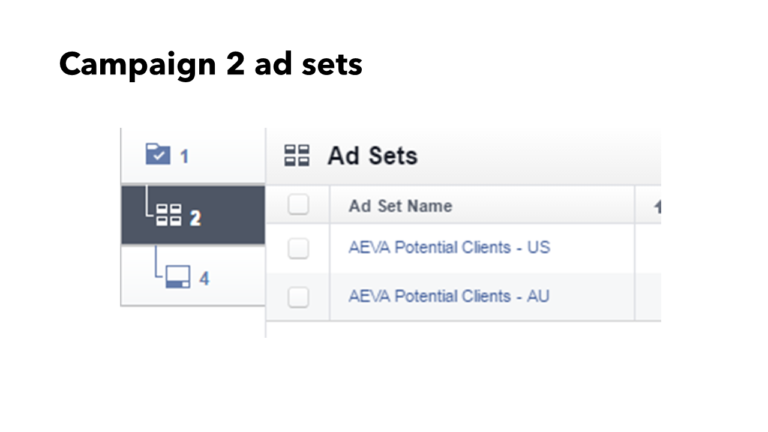 I could not contain my excitement! After setting up the rest of the campaign, I scheduled it to run on April 11, 2016 at 9PM. I was aiming to finish the campaign on April 16, 2016.

If you are asking if I was able to sleep that night, well, not immediately. It took me a few twists and turns on my bed before finally sleeping.
But you bet I was grinning from ear to ear as I called it a night.

WHAT HAPPENED NEXT? Well, you have to wait for the next post to find out more.